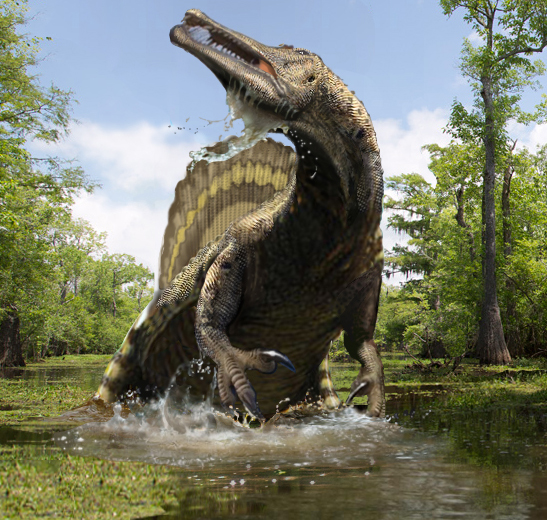 The Dino Cam freezes Spinosaurus splashing in a wet and sultry summer seaway scene, circa 100 million years ago in what is now northern Africa. During the Cretaceous Period, this region was a wet swamp environment, in stark contrast to the dry, sandy landscape of today.

Waterways were the preferred home and supermarket of Spinosaurus, and it spent as much time as possible in the water to feed and stay cool. The huge sail riding the back of Spinosaurus may have served as a "cooling fin", maintained above the waterline to catch breezes, in addition to being a "billboard" promoting its presence (warning off rivals or flashing colors to attract mates).

The Wings of Dinosaurs 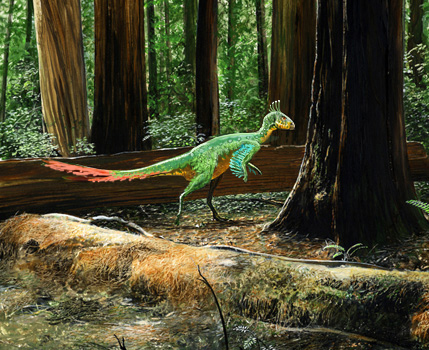 In the previous post, advances in 3D imaging in paleontological research were examined from the perspective of the origins of laser scanning technology. In the 20 years following its inception, the laser scanning of fossils was focused on evolving and improving the means of laser scanning and 3D imaging fossils. In this post, we look at how the 3D image capturing process - now technically quite sophisticated - has achieved sufficient success that researchers are free to focus on innovations in applying the 3D imaging process in novel new ways.

Of particular interest is the recent merging of 3D image capturing with flying drone aircraft. This process involves the use of remote controlled drones to carry out laser-scanning operations of fossils in remote locations, in some cases too inaccessible to accomplish in-person.

The "fossils" in question are fossil footprints, or trackways, of dinosaurs and other creatures, found in large numbers along the northwest coast of Australia.

Along the red cliffs of the Kimberley region of Australia, hundreds of footprints have been discovered. The three toed, birdlike prints of bi-pedal theropods and elephantine impressions of giant quadrupedal sauropods are represented, as well as other animal groups. The trackways are imbedded in rocks dated to 130 million years ago, when Australia was part of the early Cretaceous landscape of the supercontinent of Gondwana, as it began splitting into the modern continents of Africa, South America, India, Antarctica, and Australia.

Today, the cliffs are being chiseled away by the relentlessly pounding waves of the Indian Ocean. Not only does the remote location pose an obstacle to laser scanning the fossil site, but the tenuous proximity to the ocean creates an urgency to digitally documenting the trackways before they are lost forever.

There's no need to fear: the flying drones are here. In a brilliant convergence of necessity, researchers have devised a plan to map the trackways in their entirety with high-resolution photography and laser-mounted remotely-guided drones for the most inaccessible areas, while using specialized hand-held portable scanners for more accessible portions. Lidar, a common method of using lasers to map geograhical terrain for commercial and research purposes, was utilized here to measure the shape and depth of the foot impressions.

The team, led by Anthony Romilio of the Vertebrate Palaeontology and Biomechanics Lab at the University of Queensland, created duplicate 3D models of the track sites via use of the drones, as well as manned light aircraft and ground-based reconnaissance. The recovered 3D data permanently archives the footprints in pixel-perfect three dimensional relief, and can be adapted for display and research purposes, as needed.

No new technology was created in this project. Flying drone aircraft, laser scanning and digital 3D modeling are all previously existing technologies. What is new is the coordinated application of these technologies toward resolving unique problems.

Anthony Romilio and his team digitally rescued and saved over 70 remote trackway sites at risk of destruction via their innovative, high-tech solution to the environmental challenges of accessing and mapping the coastal footprints. This ground-breaking application of already-existing technology is a procedural breakthrough that surely will be adapted for use by other researchers in the future.

Romilio's team published their digital approach in the journal PeerJ in March, 2017.
Posted by Dinoblog at 11:51 PM No comments:

The wing of the bird-like feathered Anchiornis dinosaur under laser-stimulated fluorescence. The folds of skin in front of the elbow and behind the wrist (called patagia) were covered in feathers, just like in modern living birds. Photo by Wang XL, Pittman M et al., Nature Communications, 2017.

Several major advances in dinosaur research have been announced over the past several weeks. Two of the announcements are discussed in this blog, via two posts. This is the first post:

There is nothing new about scanning fossil bones with lasers. In the 90's, research involving the "digitization" of fossils was in its infancy, with the first serious "breakthrough" attempts exploring the possible use of lasers to scan bones to obtain data sets that, in turn, were used to create 3D models. In fact, I was involved in some of that work, with a team applying high-end laser scanning tests to the selected bones of the famous "Sue" Tyrannosaurus rex, in the mid 1990s. This was a major breakthrough, being among the first applications of 3D laser scanning technology to hard-core dinosaur science. Until then, 3D imaging was limited to Hollywood special effects labs and industrial design. The scans of "Sue" eventually led to the first 3D laser scan modeling of an entire dinosaur for the Smithsonian Institution.

These "early" 3D scans were done using lasers mounted on various forms of moving trackways, that circumnavigated the bone being scanned while shining a laser beam on the fossil along the way, until the entire specimen was digitally mapped. This equipment was rare, expensive to obtain and complicated to use. At the time, no dinosaur department had such equipment, and they lacked the expertise to use the tools. Any researcher wishing to laser scan a specimen had to out-source for the hardware, software and expertise.

Over the next 10 years however, this expensive process of outsourcing for "outside" laser scanners became replaced by researchers opting to use already existing laser scanning tools, in the form of CT scanners, that were already being used in nearby university medical departments or hospitals. This became a convenient, cost effective and efficient method of obtaining high-quality 3D scans by dino researchers, without the hassle and overhead. Paleontologists no longer had to concern themselves with the equipment - they merely had to book time on the nearest hospital scanner, and bring a fossil along. And, being a medical grade diagnostic tool, the hospital CT scanner provided better results than the earlier, outsourced type of laser scanner - a substantial win-win for dinosaur researchers.

Today, this remains the common process for obtaining 3D laser scans of fossils, without much deviation. And it works exceptionally well for scanning and digitizing the surface of a fossil, to capture and preserve in digital format the external form of a fossil.

But a new breakthrough has occurred with a recent laser scanning project. In February, a team headed by Xiaoli Wang and Michael Pittman announced stunning results when applying lasers of a particular frequency to fossils - with a twist: the fossils being scanned were still embedded in the surrounding rock matrix they were discovered in. The fossils were of a small, feathered dinosaur discovered in China named Anchiornis huxleyi. Almost by accident, by scanning fossils not yet pried out of the matrix, the lasers revealed subtle details never seen before. This aspect was partnered with the fact that a new breed of laser was being used, based on different wavelengths than was used by previous lasers and involving a unique new process of scanning, enabling soft-tissued details to be seen - for the first time.

The new scanning process incorporated in this work is called "laser-stimulated fluorescence" (LSF). It involves sweeping non-destructive laser light across a specimen while taking long-exposure photographs with a digital single lens reflex (DSLR) camera. “The laser ‘excites’ the few skin atoms left in the matrix, making them glow, to reveal what the shape of the dinosaur actually looked like,” according to Michael Pittman, a University of Hong Kong paleontologist and one of the study’s lead authors, in an interview with PBS NewsHour writer Kristin Hugo.

Using the new laser wavelengths on fossils still embedded in the rock matrix, previously invisible outlines of skin and feathers become dramatically visible. For the first time, we can vividly see the actual contours of soft skin boundaries and detailed outlines of feathers of an entire forelimb, and their exact relationship to the underlying bones. Even the "toeprints" of the feet are presented in sharp detail.

In fact, the results immediately presented a feature not known before on a dinosaur: the arm scan of Anchiornis by this team shows that at least this species of small feathered dinosaur had a triangular "patagial membrane" (wing membrane) along the anterior aspect of the elbow. The patagium is a type of skin "webbing" along the forward part of the arm, between the humerus (upper arm) and radius/ulna (lower arm) - something only seen on modern flying birds. From now on, any accurate life illustration of this dinosaur must show this feature, along with the feathers and other details, as revealed through these new scans...

The results are like looking at a shadow silhouette of the animal when alive. We now have actual evidence for how dinosaurs actually looked in life - how the integument draped their bones. This will go a long way in enabling more accurate illustrations of dinosaurs - we still don't know much about how they were colored (although we are getting more clues about that, as well*), but as more and more of these kinds of scans are done, scientists and artists will increasingly have actual "facts" on which to base their restorations on.

Wang and Pittman et al, are proceeding to scan more fossils using this novel new approach, and will surely encounter more exciting surprises along the way.

*In fact, previous research has led to some conclusions on the coloration of this species: Anchiornis apparently was adorned with black and white patterns and a red tuft on its head. 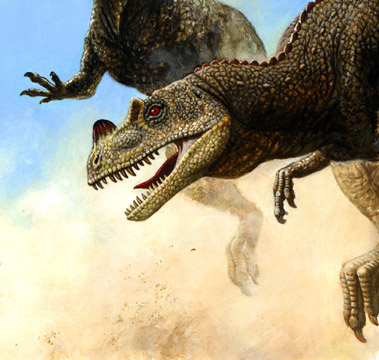 The Dino Cam zooms in on a contentious Ceratosaurus meetup, circa 153 to 148 million years ago. This apex predator of the Jurassic Period inhabited the regions known today as the Morrison Formation of western North America and the Lourinhã Formation of Portugal, as well as possibly the Tendaguru Formation in Tanzania.

Posted by Dinoblog at 5:06 PM No comments: 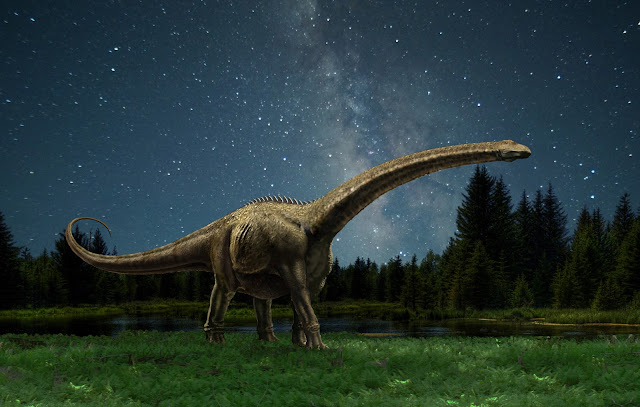 The Dino Cam captures Diplodocus under a North American Jurassic winter solstice evening sky
Posted by Dinoblog at 2:43 AM No comments: